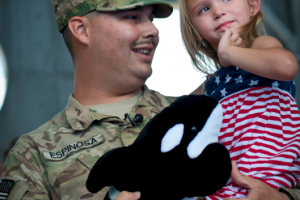 In honor of Memorial Day, SeaWorld Parks & Entertainment announced a special offer for all the men and women who have previously served as members of the U.S. armed services. Now through July 15, 2019, they can enjoy FREE admission to the SeaWorld and Busch Gardens Parks. U.S. veterans and up to three dependents can enjoy free admission […]

SeaWorld Parks & Entertainment is honoring the men and women of the U.S. armed services through its Waves of Honor military salute program. The program provides free admission to the SeaWorld® and Busch Gardens® Parks, and Sesame Place® for members of U.S. armed forces and as many as three direct dependents through 2013. Waves of Honor follows Here’s to the Heroes. Created in 2001, the program […]

Subscribe to our free newsletter and be the first to know about discounts and free events in Orlando.

Find discounts on Orlando theme parks and learn about new attractions and events.

Free & Cheap Things To Do

Orlando fun doesn't have to be expensive. Find free and cheap things to do in and around Orlando.

Orlando is more than theme parks. Find attractions and museums in and around Orlando.

Find discounts and deals on hotels, resorts and other lodging options in and around Orlando.

MEMBER OF THE LIVING ON THE CHEAP NETWORK

Orlando on the Cheap is a member of Living on the Cheap, a network of websites published by frugalistas, journalists and consumer advocates. Find practical advice on saving money on groceries, travel and shopping, plus tips from our experts on how to live the good life for less at Living on the Cheap.